Thinking Out Loud- Creative or Damaging? 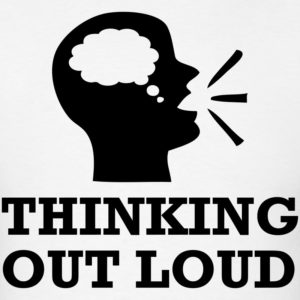 Thinking Out Loud [TOL]  – we’ve all done it – just saying to others whatever we are thinking – raw, unfiltered, unpolished, spontaneous, creative, original ideas.  At its best, the phenomenon of Thinking Out Loud can generate great brainstorming and good problem solving.  It can create intimacy that makes people better collaborators.  In general, Thinking Out Loud can be a good thing.

However, TOL also creates problems.  TOL is essentially a rough draft, and we’ve all written rough drafts that we are grateful no else ever read.  TOL is like farm fresh milk or just squeezed apple cider.  No filtration, pasteurization, homogenation, or sterilization to get in the way of that nice fresh flavor.  But raw milk and raw cider sometimes make people sick.  Even though people are well-intentioned, TOL can cause pain for others, when they hear your version of the unvarnished truth.

We’ve seen several situations where TOL has had really bad results.  Here are a couple of case stories:

Case One:  An executive candidate gets a job offer directly from the employer.  It would be a lateral move for him, which the candidate knew at the outset, but the position has built-in growth several levels up, and could be a very good move for his career.  The candidate engages in TOL both verbally and by e-mail (about the offer), and was really just exploring possibilities… Could the title be elevated?  Could this position be put in the next pay band (with inflated pay range he thought that band might include)?  Would the employer compensate for the unvested stock he’d walk away from?  Although the candidate had been given the range, he was “what-iffing” possibilities.  Complicating the matter – other friends and advisors had engaged in their own TOL with the candidate, so he was now expressing not only his own fantasies, but those of others.  The employer flipped out and thought the candidate was on another planet.  Result:  Dead deal.

Case Two:  Company hires a new VP of Operations to come in and be a Change Agent in a turnaround.  The company President was a quiet type, so they sought an outspoken, decisive, action-oriented individual for the VP role.  Once on board, the new VP engaged in TOL in many meetings, with the union, and the long-term middle managers.  He made it a regular practice to explore (without thinking through the ideas) – he just expressed them in TOL mode, all the time.  Result:  Union, key long-term employees, and the President himself were all alienated by what they perceived as the ill-conceived wild ideas of the new guy.  VP was fired.

There are countless other examples of how TOL doesn’t always work well:  The well-meaning friend or relative who suddenly knows how to run your life better, when all you wanted was a sympathetic ear.  The meeting attendee who feels he must participate somehow, but hasn’t had an original idea in a while.  The acquaintance who doesn’t know you too well, but knows your situation and has numerous solutions – that don’t really apply to you.

These instances where TOL doesn’t work all have something in common: a lack of intimacy and trust.  Whether to TOL is sometimes a tough choice.  Spontaneity and fresh ideas are wonderful.  But, TOL is best engaged in with people you really trust and rely on.  The person who can accept TOL from you already feels totally comfortable with anything you might say.  The flip side?  Hurt, resentment or just wasted time.